At the start of the decade, we still had 722 million unused IPv4 addresses, 19% of the 3.7 billion usable IPv4 addresses. The five Regional Internet Registries (RIRs) together allocated/assigned 200 million IPv4 addresses per year to ISPs and other users. Google's measurements showed that world wide, 0.3% of their users had IPv6. Out of the Alexa global top 500 web sites, about 2% were reachable over IPv6.

Although IPv6 support in operating systems was relatively mature by 2010, autoconfiguration of network settings, especially DNS addresses, was still incomplete in various operating systems and home routers. There was still a lot of software out there that only worked over IPv4, and most IPv6 connectivity worked using IPv6-in-IPv4 tunnels as most ISP routers didn't run IPv6 yet. In 2007, the IETF had deprecated NAT-PT, the mechanism that enables IPv6-only systems to talk to IPv4-only systems.

So there was still a lot to do.

Running out of IPv4

The way in which the distribution of IPv4 addresses worked was that IANA, the Internet Assigned Numbers Authority, gave out blocks of 16,777,216 IPv4 addresses ("/8s") to the five RIRs, which then distributed them to "local internet registries" (LIRs, which are mostly ISPs) as needed. In February 2011, the IANA global pool of unused IPv4 addresses ran dry. Three months later, APNIC (Asia/Pacific) entered its final /8 policy, where each LIR can only request one last block of 1024 IPv4 addresses.

In September of 2012, it was Europe's turn as the RIPE NCC entered its last /8 phase. LACNIC (Latin America/Caribbean) reached their final /10 in June of 2014.

ARIN (North America) adopted a different system, running out of IPv4 addresses and setting up a waiting list in September 2015. In November 2019, the RIPE NCC ran out of its final /8 and also adopted a waiting list. Interestingly, both the ARIN and RIPE NCC waiting lists only have a few entries currently.

And it looks like AFRINIC (Africa) will be reaching its final /11 in the next months.

And then: trading and translating addresses

The internet is continually growing, with new devices coming online that need an IP address. To support that continued growth using IPv6 addresses, we should have reached 100% IPv6 deployment by the time APNIC was no longer able to fulfill requests for IPv4 address space in 2011. This way, the new device with an IPv6 address would be able to communicate with all existing internet-connected systems over IPv6. However, at that point, IPv6 adoption was actually slightly lower than the 0.3% a year earlier, as the decline in IPv6-in-IPv4 tunneling was larger than the growth in "native" IPv6 deployment.

So as the IPv4 address pipeline started to dry up, people turned to two things: trading and translation. In 2011, Microsoft set the scene for the IPv4 address market by buying 666 thousand IPv4 addresses from bankrupt Nortel for $11.25 per address. The going price has almost doubled since then.

At the same time, in order to get more out of their existing supplies of IPv4 addresses, ISPs have started using Network Address Translation (NAT) to have multiple subscribers share a single (public) IPv4 address. The obvious way to do this is NAT444: from private IPv4 to "intermediate" IPv4 to public IPv4. (It is assumed to consumer's home router applies the first 4-to-4 translation step.)

Other techniques are to skip the intermediate IPv4 step, by translating from IPv6 to a shared IPv4 address (the NAT-PT replacement NAT64), or to tunnel IPv4 packets with private addresses over IPv6 and then translate them (DS-Lite). NAT64 has the downside that IPv4-only software doesn't work with it, which can be solved by 464XLAT, where IPv4 packets (or system calls) are translated to IPv6, which is then translated back to IPv4 by a NAT64.

As the IETF put the finishing touches on those last few supporting protocols for IPv6 and OS vendors implemented them, IPv6 adoption started to increase, instigated by the World IPv6 Day and World IPv6 Launch efforts by the Internet Society, in June of 2011 and 2012, respectively.

The idea behind World IPv6 Day was that (big) web sites would enable IPv6 for 24 hours in order to see if anything bad would happen. After 24 hours, IPv6 was turned off again and any issues could be fixed before enabling IPv6 permanently a year later. But despite a successful WIPv6D, there was some concern that some people would experience timeouts as their systems tried to connect over non-working IPv6. To avoid that, "happy eyeballs" was created.

The idea is that a browser or other application starts an IPv4 and IPv6 connection side-by-side, and then simply uses the one that connects first. This way, if the computer thinks it has IPv6 but the IPv6 doesn't work, there's no need to wait for the IPv6 connection to time out before the application retries over IPv4. This way, IPv6 (or IPv4) connectivity issues become largely invisible to the user. Later, the mechanism was adjusted to give IPv6 a slight head start to more consistently use IPv6 when it's available and working well.

The rise of IPv6 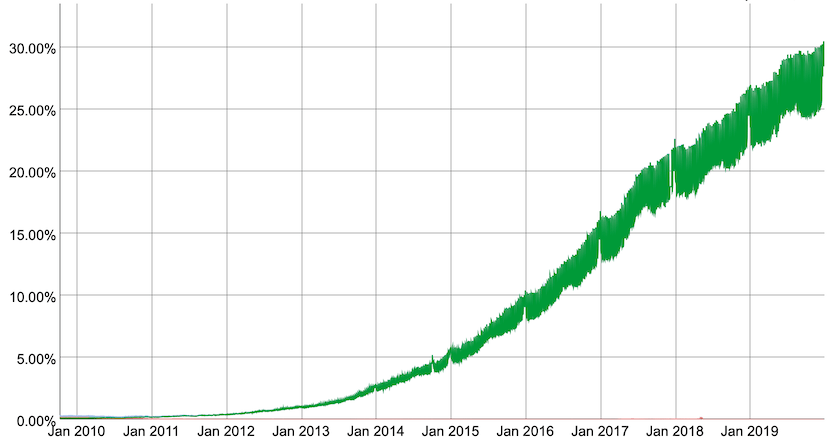 Interestingly, IPv6 use is 5% higher on weekends: it looks like more people have IPv6 at home than at work. In many countries, broadband ISPs have started to roll out IPv6, either in the form of dual stack, with both native IPv4 and IPv6, or as DS-Lite, where the IPv4 is tunneled over IPv6 and then NATed. In the meantime, many mobile phone operators have switched the mobile internet connectivity for some groups of their users (usually based on the capabilities of the phones involved) to IPv6-only plus NAT64. On Android phones aided by 464XLAT, but Apple requires iOS applications to work natively over IPv6.

However, in other countries, IPv6 deployment is much lower, apparently because big broadband ISPs and mobile operators haven't adopted IPv6. So what we're seeing is 32% IPv6 deployment in Finland, but only 4.3% in neighboring Sweden.

Ten years ago, the expectation was that China would be leading in IPv6 deployment, while the US wouldn't be feeling the need to do the same, with more than a billion IPv4 addresses registered in that country. But the opposite happened: China is at a relatively low IPv6 deployment and the US at around 50%. However, the Chinese IPv6 figures vary from 0.75% as measured by Google to a little over 4% as seen by Facebook and 15% observed by Akamai.

There don't seem to be ongoing measurements of how many web sites have IPv6 enabled. I looked at the DNS entries for a sample from the Tranco list, and of the top 100 domains, 42% are dual stack and 58% IPv4-only. (Not counting the few that have neither an IPv4 address nor an IPv6 address in the DNS—some of these domains aren't used for web sites.) These numbers decline as we reach the long tail:

The FAANG (Facebook, Amazon, Apple, Netflix, Google) + Microsoft companies, which are responsible for 43% of all internet traffic, all have IPv6 deployed. (Correction: Amazon's web sites are only reachable over IPv4.)

With IPv6 deployment around the 50% mark in many places, the "is the glass half full or half empty" question comes to mind. On the one hand, 25% or more IPv6 deployment clearly proves those who said IPv6 would never amount to anything wrong. On the other hand, even half a decade after most of the world, for all intents and purposes, ran out of IPv4, that same IPv4 protocol is still doing way more business than its intended replacement, with no signs that this will be changing anytime soon.

Check back in two weeks to read my thoughts on IPv6 in the 2020s, where I will argue that the current situation makes more sense than you'd think at first glance, and that the IPv4/IPv6 endgame is already underway.